Can We Identify a Common Ancestor of our Pruitts, Sweeneys/Swinneys and Whites? 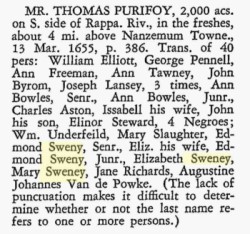 Thomas Purifoy Patent 1655
If Rosamond Prewtt was the mother of our Samuel Pruitt, it may be that Samuel's father or grandfather was a Sweeney/Swinney living in the Tidewater/Northern Neck region of Virginia at that time. At least one family living in that area can be considered a prospect for having a son or grandson who fathered Samuel. Edmund Sweny, Sr. was born in Ireland or England in the early 1600s. He emigrated to the Tidewater area of Virginia sometime before 1655. Based on what we know about his children and grandchildren, Edmund likely lived in Elizabeth City Co., Va. most of his life. Thomas Purifoy's headright patent indicates that Edmund Sweny's wife Elizabeth, son Edmund, Jr. and daughters Elizabeth and Mary accompanied him to Virginia. Their presence on the patent would, of course, indicate the three children were born before 1655, possibly long before that date. Some researchers indicate that after their arrival in Virginia, Edmund and Elizabeth had three other sons (Samuel, Merritt and Lazarus). However, we have found no contemporaneous records to support this. It may be that Edmund and Elizabeth had more children, we just can't confirm names or dates of birth based on the records we now have. 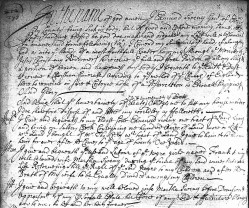 Edmund Sweny Will 1697
A will written in 1696 and probated on May 10, 1697 in Elizabeth City Co., Va. has generally been linked to Edmund Sweny, Sr. by most researchers. However, we lean towards the idea that this is actually the last will of Edmund Sweny, Jr. The will's author indicates that his eldest son Edmund was under the age of 21. The Edmund Sweny who accompanied his father to Virginia in 1655 or earlier would have been at least 43 years of age in 1697 and likely was much older than that. The wife of the author of this will was named Martha. We're pretty confident that Edmund Sweny, Jr. married Martha Tabb, the widow of Thomas Tabb, around 1687 when she would have been 40 years old. We could certainly construct scenarios where Martha married Edmund, Sr. and the 1697 will was Edmund, Sr.'s, but it is much more likely that it was the will of Edmund Sweny, Jr. It is less complicated to imagine that he and his first wife, name unknown, had the children mentioned in the will before she died in the early to mid-1680s. After her death, Edmund, Jr. could then have married Martha Tabb. According to sources, Martha was the daughter of Augustine More who was featured prominently in Edmund's 1697 will. In addition, the Tabb family and Swenys crossed paths many times in the future, making the Sweny-Tabb union much more probable.

With regard to the question of whether Edmund Sweny, Sr. had children other than those mentioned in the 1655 Purifoy patent, it can only be said that no others are recorded in any records we've seen. It's clear that Edmund, Jr. was the father of sons named Edmund and Samuel based on Edward Day's last will, written on May 3, 1687, which mentions "Edmund Swinney and Samuel Swinney, sons of Edmund Swinney and Martha, his new wife." Edmund Sweny's 1697 will also indicates he had other children who had not yet "come of age." We suspect one of those minors was Merritt Sweny who was a witness to Elizabeth Tabb's 1717 will and another was Lazarus Sweny who was mentioned in a York County legal document in 1726. In his 1732 will, Lazarus Sweny called Samuel Sweny "My Brother" and mentions two sons, Daniel and James. And, in William Tabb's 1721 will (see below), he essentially calls Merritt Sweny, Samuel Sweny and Edmund Sweny his brothers. We believe all this points to Edmund Sweny, Jr. having four sons and Edmund Sweny, Sr. only having one since no others seem to show up in the record.

Samuel Swinney was identified in the early 1720s as the owner of a ship, the Sarah and Mary, a 30-ton sloop built in 1709 and registered in Virginia. It's apparent that the Swenys were involved in shipping. Given the Y-DNA evidence, is it possible that Edmund Sweny, Sr., a son or a grandson was the father of Samuel Prewtt who was born in 1700 in Northumberland Co., Va.? There were many ports of call in the Tidewater region and, in particular, the Northern Neck area where Rosamond had her son. If one of the Swenys was the father, he would have to have been born around 1680 or earlier. Given the extensive dealings the Swenys had with London, New York and other ports, it's likely they owned several ships and visited many ports of call in the Tidewater area.

Just to add further credence to the idea that Edmund, Jr. was the subject of the 1697 will, there are records in Charles Parish, York Co., Va. indicating that Edmund Sweny and wife Frances had three children in 1709, 1710 and 1711. The first was Daniel, the second was Edmund and the third was Martha. It seems likely that these were the children of Edmund, the "eldest son" of the subject of the 1697 will. Perhaps contributing to the confusion, Daniel's father was listed as Edmund, Jr.; however, that was generally a sign that someone was the son of a similarly named individual, not a position of hierarchy in the family. In the Pruitt family we often use Samuel Pruitt I, II, III, and IV to distinguish fathers from sons. However, these Samuels did not use that nomenclature. They were always Sr.'s and Jr.'s in the records. When a Jr. had a son, and his father died, he became the Sr. and his son was Jr. That's likely the same case for all the Edmund Swenys in the historical record.

In William Tabb's 1721 will, he says his "two loving sons," William and Thomas Tabb, can receive their inheritance "when they come of age," indicating they were still minors in 1721. He mentions "my three brothers," Edward Tabb, John Sclater, and Merritt Sweny; Martha and Mary Sclater as "my two sisters"; Martha Sweney as "my brother Edmund Sweney's child"; and Charles, "son of my brother Samuel Sweney." All of this suggests that William Tabb was not only raised in the same household as Merritt Sweny, Edmund Sweny and Samuel Sweney (as suggested by the 1697 will of Edmund Sweny), but that he also had three Sclaters in that household. It's possible that his mother, Martha (Tabb) Sweny, married again after Edmund Sweny died in 1697 and created an even more blended household with the addition of a widower's three children. William Tabb named "my beloved brother Merritt Sweney sole and lawful executor" of his last will and testament.

The above family tree is based on what we know so far about the Swenys in early colonial America. As far as we can determine based on wills and birth records, Edmund Sweny, Jr. had four sons and all must have been positive for the FT55898 SNP. We can deduce this based on the fact that we've found six modern day descendants who are all positive for FT55898 and none share a newer SNP. It normally takes two or three generations for a new SNP to emerge in a family line; therefore, it is likely that these Sweny descendants broke off from each other pretty soon after the generations shown on this tree. The Pruitt branch must have been a separate branch from Edmund Sweny, Jr. since they are not positive for FT55898. That means Samuel Pruitt could have been a son, grandson or great-grandson of Edmund Sweny, Sr., but it would be in a line distinct from Edmund Sweny, Jr. Given that Samuel was born 45 years after the Swenys arrived in the colonies, our bet would be that he was a grandson or great-grandson, given that Edmond Sweny, Sr. would have been quite old, if he was even alive, in 1699 when Samuel Prewtt was conceived. In any case, Edmund Sweny, Sr. must have had another son who has not shown up in historical records. That son could have been legitimate or illegitimate. Whatever the case, Samuel Pruitt was born in 1700 without the Sweny surname. 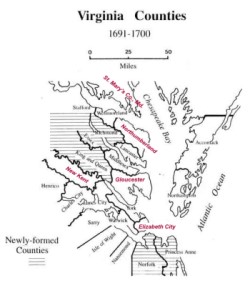 Virginia Counties Around 1700
Elizabeth City Co., Va. is just south of Gloucester Co., the presumed base of operations for Col. Robert Abrahall. Gloucester Co. is just south of Northumberland Co. The three locations are around 60 to 70 miles apart in total. It's not known whether any of these individuals, Col. Robert Abrahall, the Swenys or Rosamond Prewtt, knew each other. All of this needs to be researched in more depth to see if a more detailed family tree can be constructed and to see if any of our Swinneys/Sweeneys/Whites can be tied to the descendants of Edmund Sweny, Sr. Geography and Y-DNA testing provide the basis for the scenario that a descendant of Edmund Sweny, Sr. could have fathered Rosamond Prewtt's son. The fact that there are at least six male children in the second generation after Edmund Sweny, Jr. provides a basis for presuming that these children are in the lines of Swenys who carried on the single SNP (FT55898) into distinct lines to our modern-day Sweeneys, Swinneys and Whites. These Sweny children would have had to migrate west and south of the Tidewater region to be the progenitors of each of our modern-day Sweeney lines. More work needs to be done to uncover the records necessary to prove relationships back to the early Swenys. We will need to work forward in time from Edmund Sweney, Sr. and his family and backwards in time from the earliest known ancestors of our Swinney/Sweeney/White testers. With that in mind, here is a graphic showing the earliest known ancestors of each of our testers.

Once opened, clicking on the right side of the above chart will cycle the reader through the three family groups - Whites, Sweeneys and Pruitts. None of our testers has identified ancestors who lived in the 1600s with any degree of confidence. Historical evidence confirms that the Whites split with the Sweeneys in the mid-1700s with the birth of Moses Swinney's children and their adoption by their White stepfather. Historical, STR and SNP evidence strongly suggests that the Pruitts split from the Sweeneys with the birth of Samuel Pruitt in 1700 or one generation earlier; either scenario requires that at least one non-parental event (NPE) occurred. The Sweeney/Swinney descendancy is more problematic since no common ancestor has been confirmed (which is likely the reason that no new SNP has been identified beyond their shared FT55898/FT48931). The purpose of these family trees is to provide a starting point for our historical research into finding the nexus of these families whenever and wherever it occurred. We can begin first by looking at records in the counties immediately around the Tidewater region and then moving outward towards the location of their earliest proven ancestors.

It's well documented that Moses Swinney of Granville, N.C. was the progenitor of the White-surnamed individuals in our FT55898 cohort. However, there are two or three other Moses Swinneys/Sweneys/Sweeneys who may play that role in our group. Here's what we know about each one:

In the next section, we'll delve more deeply into these records and others in southern and western Virginia and Lincoln and Casey counties in Kentucky in an attempt to flesh out the relationships of these individuals to our testers.