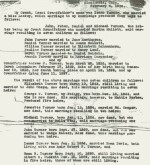 On Feb. 6, 1924, Eben Forbes Turner, from memory, outlined the Turner family history to William Ellis Pruiett who prepared a brief document reflecting what his uncle told him. Most of Eben Turner's recollections have been confirmed. However, there are a few inconsistencies in his account. The first paragraph says his great-great grandfather, Isaac Turner, married a Miss Lackey and they had four sons, John, Peter, Daniel and Michael and that Michael, his great grandfather, married Martha Mallott. However, the last paragraph says that Daniel Turner born June 10, 1758, married Eleanor Lackey and that their son, Michael, born in 1781, married Elizabeth Beltz. The New York Genealogical and Biographical Record, Vol. 061, No. 3, July 1930, Grevenraedt Family, p. 235, indicates that Daniel Tourneur (born June 10, 1758), son of Peter Tourneur and Elizabeth Grevenraedt, married Eleanor Lackey. Loudoun Co., Va. records confirm that Michael Turner (who was born around 1781) and Elizabeth Beltz, the daughter of Andrew Beltz, were married on Oct. 29, 1799. Thus, the last paragraph of Eben Turner's recollections would seem to have superceded his first paragraph regarding the marriage of Michael Turner, and the children listed in the second paragraph were from his marriage to Elizabeth Beltz.

Another piece of family lore may also shed some light on Eben Turner's recollections. Growing up, Ralph Pruiett, Sr. recalled that his grandmothers Turner and Brown told him many times that the Woolworth Building was built on property once owned by the Turner family. If Eben Turner's recollections about Daniel Turner (Tourneur) were correct, then there could be some truth to this family story. Peter Tourneur's wife, Elizabeth Grevenraedt, was a descendent of Anneka Jans and Roelof Jansen who, in the 1600s, owned 65 acres of land on the southern tip of Manhattan Island where the Trinity Church was eventually built. This land is now the site of Manhattan skyscrapers including the Woolworth Building. This family legend and the ties to Peter Tourneur that Eben Turner's recollections suggest, would seem to support the idea that our Turner ancestors may have once owned the property under the Woolworth Building.

Unfortunately, there are flaws in this scenario. It appears unlikely that Daniel Tourneur was our ancestor for at least two reasons. First, it is fairly well documented in Virginia and Pennsylvania records that the father of Michael Turner, born around 1781, was also named Michael Turner. The records refer to the two as Michael Turner, Sr. and Michael Turner, Jr. While sometimes this could be merely differentiating an older Michael Turner from a younger Michael Turner, and not necessarily a father and son, the fact that they lived together with other siblings, strongly points to the conclusion they were father and son. Thus, Daniel Tourneur could not have been the father of Michael Turner, Jr. and he would not have been old enough to have been his grandfather. Second, based on DNA tests conducted by Family Tree DNA, it appears to be very unlikely that the Tourneurs of New York were related to our Turner line. So, how did this family legend about the Woolworth Building get started? As it turns out, in the late 1800s and early 1900s, there were unscrupulous lawyers trying to take advantage of people who could have been related to Anneke Jans and her descendants. Going as far back as the mid-1700s, there had been questions about whether the Jans farm had been properly transferred to subsequent owners. It's possible that our Turner ancestors were misled into making connections to the Tourneur family of New York that did not exist. This is speculative, but seems plausible, especially considering Eben Turner's contradictions in his recollections.

There is one additional piece of evidence to support the scenario that our ancestors were duped, and perhaps swindled, into believing they were descended from Daniel Tourneur of New York. It comes to us from a brief biographical sketch of William H. Turner, son of Michael Turner, Jr. and Elizabeth Beltz, which was included in a History of Clinton Co., Ohio, published in 1882 by W.H. Beers and Company. The sketch indicated that William H. Turner's ancestors were German and that his grandfather Lewis Turner and family and grandfather Beltz and family "emigrated from Holland in 1756 and settled in New York City where they had an interest in the celebrated Holland purchase." Besides giving us a third grandfather for the children of Michael Turner, Jr., Lewis Turner (which contradicts Eben Turner's account that this grandfather was Isaac Turner who married a Miss Lackey or Daniel Turner who married Eleanor Lackey), the sketch ties the Turners to the Holland Purchase. This was probably meant to be a reference to the Manhattan Island farm of the Jans family who emigrated from Holland and not the Holland Purchase which was located in western New York and took place in the 1790s when the Turners were living in Loudoun Co., Va. We have found no evidence that the Turners were associated with the Holland Purchase, the Holland Land Company or any of its associated Dutch bankers. What this sketch does provide, however, is another clue that the Turners were German and emigrated to the Americas in the mid-1700s.

Michael Turner, Sr., the first Turner ancestor we can confirm at this time, appears in tax and church records in Loudoun Co., Va. between 1790 and 1800. During that period, records from the New Jerusalem Lutheran Church in Lovettsville, Va. indicate that the family name was "Dreher," which is German for "turner" or "lathe operator." It's not clear if this is an indication that the family name had been Dreher or just that this church, whose congregation was predominantly of German ancestry, translated Turner into Dreher for their records. All Loudoun County records at that time listed their name as Turner, not Dreher. Michael Turner, Sr.'s wife was Margaret (Peggy) Turner. Their children were:

While the Turner family was living in Loudoun Co., Va. in the 1790s, Lewis Turner and Michael Turner, Jr. married daughters of Andrew Beltz and Julianna (Harclerode) Beltz. Lewis (Ludwig) Turner/Dreher married Anna Maria Beltz on Dec. 5, 1796 at the New Jerusalem Lutheran Church in Lovettsville, Va. Here is a copy of the entry in the church record in the original German as was the practice in that church. Immediately below the image of the church record is a rough English translation. Anna Maria Beltz had been born on March 20, 1770 in Lancaster Co., Penn. Almost three years later, on Oct. 29, 1799, Michael Turner and Elizabeth Beltz obtained a marriage license in Loudoun Co., Va. With that license, Michael Turner, Jr., Andrew Beltz and Michael Turner, Sr. bound themselves to pay the marriage bond of $150. At the bottom of the marriage license, both Turners made their mark while Andrew Beltz signed his name. John Littlejohn, a Methodist minister, performed the wedding ceremony. Given the distance between Lovettsville and Leesburg, around 30 miles, it is likely that the marriage took place on the same day the license was issued. Why did Michael Turner, Jr. and Elizabeth Beltz get married in a civil ceremony while Lewis Turner and Anna Maria Beltz had previously gotten married in the church? The answer may lie in the fact that Michael's and Elizabeth's first child was born around four months after their wedding. This impending birth may have necessitated their obtaining a marriage license which allowed for an immediate wedding as opposed to using the "marriage by banns" procedure which required an extended waiting period before the marriage could take place. Since the marriage of Lewis Turner and Anna Maria Beltz was not officially recorded in Loudoun Co., it is likely they used the "marriage by banns" procedure which called for a public notice of an intended marriage to be given verbally or by written notice for three consecutive meetings at the church(es) of the bride and groom or at other public gatherings. Under these circumstances, it is understandable that the Turner and Beltz families would want to have a quick civil ceremony in Leesburg for Michael and Elizabeth rather than a publically announced event in Lovettsville.

With all the documentation we have for the Turners/Drehers living in Loudoun Co., Va. in the 1790s, we have no concrete information to indicate where they lived before that. Because they traveled from Loudoun Co. to Pennsylvania with the Beltz family in the early 1800s, it is possible they arrived in Loudoun with that same family. William H. Turner seems to suggest that the Beltz and Turner families arrived together in New York from Holland in 1756. However, there is documentation that the Beltz family arrived in Philadelphia in September 1753 and there is further documentation that they lived in Pennsylvania and Maryland before arriving in Loudoun Co., Va. around 1775. We do not find similar records for the Turners/Drehers at the same locations as the Beltz family. The Turners do not show up in Loudoun Co. records until 1790. There are very few clues to their location before 1790. There is documentation that a Hans Michael Dreher and Andreas Dreher arrived in Philadelphia from Rotterdam on the Ship Hamilton on Oct. 6, 1767. After that, there are a few mentions of a Michael Dreher and Michael Turner in Pennsylvania, but none that can be definitively linked to our Turner line.

A possible clue to finding more information on Michael Turner/Dreher may come from what we know about Pennsylvania German naming customs that were used in the 1700s. The most common naming custom was, in part, as follows: A tantalizing clue about the possible origins of the Turner/Dreher family have turned up in marriage and birth records in Alsace, a small region along France's eastern border with Germany. Since Alsace was alternately German and French territory over the years, it has always had a large German population. Alsatian marriage records indicate that a Johann (Hans) Michael Dreher married Eva Margaretha Dublerin on Sept. (or Nov.) 19, 1765. [The "in" at the end of Margaretha's last name simply denotes she is female; thus, the family name was Dubler.] Johann (Hans) Michael Dreher's father was listed as Johannes Dreher. Eva Margaretha's father was Jacob Friedrich Dubler. Michael Dreher's brother was listed as Hans Jacob Dreher. The marriage took place in Goersdorf (Preuschdorf), Bas-Rhin, France. It's interesting to note a few things about this marriage record.

As indicated in the last paragraph, a second Alsatian record indicates that Johann Michael Dreher and Eva Margaretha Dubler had a daughter, Eva Margaretha, on Dec. 26, 1766. The baptism/christening took place in Preuschdorf, Bas-Rhin, France. As already noted, many Alsatian Germans traveled down the Rhine River to Rotterdam to embark on their journey to America. It's possible that this Johann (Hans) Michael Dreher made that journey down the Rhine with another Alsatian, Andreas Dreher, in mid-1767 and found passage on the Ship Hamilton which docked in Philadelphia on Oct. 6, 1767. While the dates and names work out nicely in this scenario, with the exception that we have not found a daughter named Eva Margaretha (the mortality rate for children on voyages to America was high), there is scant additional evidence to support it at this time. There is evidence of an Andreas Dreher living in Lancaster Co., Penn. in the late 1700s, the same area in which the Beltz family lived, but there is no evidence that Hans Michael Dreher lived there.