Use the site navigation to learn more about our ancestors including the Brown, Turner, Climer and Hawker families on the Pruiett side and the Seals and Hawker families on the Parker side. John Hocker, who emigrated to Maryland from Wales, and Elizabeth Wright, who emigrated from Scotland, are the most distant ancestors we've found so far. They were married in Maryland in 1671 and just happen to be direct ancestors on both the Pruiett and Parker sides of our family. For more on the two Elizabeth Hawkers who appear on both sides of our family tree, go to Hawker.

Most of our ancestors were farmers with the exception of the Browns who were blacksmiths, wagon makers and carpenters. The Turners likely started as mill workers in Virginia in the 1790s, if not long before that, but later took up farming in Ohio. 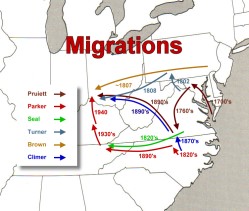 For long periods of time during the 1700s and 1800s, our Pruitt, Hawker, Climer, Seals and Parker ancestors lived within 50 miles of each other in south-central Virginia and north-central North Carolina. The Pruitts, Hawkers and other families had moved from the area just north of present-day Washington, D.C. to south-central Virginia in the mid-1700s where the Seals already resided. Later, the Seals moved to eastern Tennessee, as did the Parker family from north-central North Carolina. Some Climers and Pruetts moved to southwestern Ohio in the late 1890s. Then, coming full circle, the families came together again when Esther Ruth Parker met Ralph Ellis Pruiett outside a bus station in Cincinnati during World War II. See Memories, Part 4, for Ruth Pruiett's reflections on how they met, courted and married during the war.

A significant portion of the narrative on this site was initially written by Ralph and Ruth Pruiett in the 1990s. In recent years I have been retracing their steps to uncover additional primary source documents and expand on their research. I have also been in touch with many other researchers around the country who are trying to unravel some of the same mysteries such as: Where did our Turner ancestors live prior to their ten-year stay in Loudoun County, Virginia in the 1790s? Were the Turners of German ancestry? Who were the parents of Hubbard Brown and when, and from where, did the Brown family immigrate to America? Who was the father of Thomas S. Pruett's second wife, Icyphenia B. Ford? What happened to Waggoner Climer, the presumed father of Isaac D. Climer? My thanks to all those who have offered encouragement and shared their research so that we could continue together down the path of discovery.

A few of the conventions used on this website should be explained. Individuals who are in our direct ancestral line appear in bold brown type, usually when they are mentioned for the first time on a page, but sometimes more frequently where it seems helpful. Links are in bold red type and not underlined until you mouse over the link. When the information from a census record is placed in a table, the enumerator's original spelling is maintained; information in brackets represents my best effort to correct the original record where it seems helpful to do so. Census tables always include a link to the original census record; a broad, gray horizontal line within the census image means that other household information was removed to make it easier to read the record of our ancestor's household. Finally, an exact quote from another source is either placed between quotation marks or indented with a slightly smaller font size. 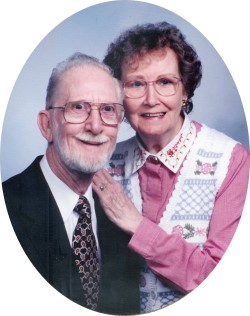 This site is dedicated to the memory of loving and supportive parents who believed in the importance of knowing, understanding and remembering the past. Genealogy was my father's passion after he retired. It gave him great joy to uncover information about an ancestor and even greater joy to share his findings with others. This website is a way to share his research and their memories with an even wider audience of family members and others. We will add to the site, as we can, using and building upon their stories and research.

Please contact Bill Pruiett if you have any observations or comments about genealogy in general or if you want to share information with me.