Easy Purchase located on a modern map of the area around Colesville, Md.

In 1737 Samuel Pruitt signed an agreement with Nathaniel Beall to lease 100 acres of land, including a 20 ft. dwelling house and a 50 ft. tobacco house. The agreement was written on Sept. 22, 1737 and recorded on November 22, 1737. This "indenture" was for seven years, starting on Dec. 30, 1736 (and thus was in effect until Dec. 30, 1743). The agreement required Samuel Pruitt to "pay" Nathaniel Beall 600 pounds of "clean, top tobacco" annually. There were many other provisions in the agreement designed to protect both the lessor and lessee. This 100 acre parcel was part of a much larger tract called "Easy Purchase" which was located within the boundaries of Prince George's County at that time. Ned Bayley's book, "Colesville, Maryland, The Development of a Community, Its People and Its Natural Resources, Over a Period of Four Centuries," places "Easy Purchase" just south of present day Colesville in Montgomery County, Md. Other 18th Century tracts around Colesville included Drumeldry, Wolfs Denn, The James and Mary, Beall Christie, Bealls Manor and Addition to Easy Purchase, all owned by members of the Beall family, as well as Snowdens Mill and Snowdens Fourth Addition to his Manor which were owned by Richard Snowden. Most of the desireable land in Maryland was owned by rich men like the Bealls and Snowdens. This probably was the reason Samuel Pruitt's sons (along with several neighbors) made a beeline for southern Virginia when their father died in 1760/61. Samuel Pruitt, Jr. was a successful land owner in Halifax/Pittsylvania Co., Va., something he would not have been able to do in Maryland at that time.

There are several aspects of this lease agreement that stand out. Both Samuel Pruitt and Nathaniel Beall were described as "planters." On the surface, that appears to be a sign of respect for Samuel Pruitt. The agreement assumed that Samuel would grow tobacco on this land and pay his rent with 600 pounds of that commodity. The cultivation of tobacco was a grueling business and the signing of this seven-year lease agreement should dispel any ideas that Samuel Pruitt was born in 1684, thus making him 53 years old at the start of the agreement and 60 at the end. It's much more likely that he was born in 1700 and was 37 years old at the start of the agreement. The agreement called for a rent of 600 pounds of tobacco if Samuel worked the fields himself and 700 pounds if he hired or took on "any labouring male person to work with him." We don't know if Samuel hired a male helper, but he did have three daughters who would have been old enough to work in the fields (ages 16, 13 and 11 at the start of the agreement). Samuel's sons were only 7, 3 and 1 at the start, but could have contributed over time. Estimates of how much tobacco a farm could produce at that time vary quite a bit and were highly dependent on weather and other factors. The estimates for the output of one adult range from 400 to over 2,000 pounds of tobacco a year. Obviously, Samuel was hoping to achieve the upper part of that range (or much more with his family's help) in order to pay his rent to Nathaniel Beall and have enough left over to support his family. The support of family members had to play a big part in his ability to achieve the production he needed. 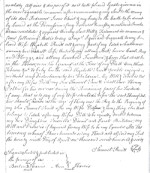 Will of Samuel Pruitt

Samuel Pruitt signed his will on April 29, 1760 and died before Jan. 3, 1761, the presumed date of probate. The date of probate is not entirely clear since it was designated as Jan. 3, 1760 in the will book. However, it appears immediately after a will that was probated on Jan. 2, 1761 and immediately before a will that was probated on January 12, 1761, so Jan. 3, 1761 seems the likely date. The confusion over the date of probate has led many Pruitt researchers to falsely claim the will was written on Jan. 3, 1760 and probated on April 29, 1760. The will says wife Elizabeth gets all livestock, household furnishings, crops and Henry Doltin [Dalton] for the remainder of his servitude, if any, until age 31. At his mother's death, Samuel Pruitt [II] was to get Henry for the remainder of his servitude, if any. Daughters Priscilla Davail [Duvall] and Sarah Boilstone [Boydston] were to get the remainder of the estate. Samuel Pruitt appointed his wife as executor. The will was witnessed by Barton Harris and Ann Harris. Margaret (Pruitt) Hawker, Zachariah Pruitt, John Pruitt, and Mary Pruitt were not mentioned in the will.

Not long after Samuel Pruitt's death, his widow Elizabeth married John Riddle, a widower in his late-50s with a large family, who owned both land and slaves in Prince George's Co., Md. On June 5, 1765, the 63-year old Elizabeth recorded the following notice in Frederick Co., Md.:

... I Elizabeth Pruitt (... now Elizabeth Riddle) has delivered all my right and title to the Estate as can be found which my former Husband Pruitt left me unto my late [of late - i.e., current] Husband John Riddle....

John Riddle served as the administrator of Samuel Pruitt's estate. He owned several tracts of land in Prince George's Co., Md. including Poplar Thicket which was likely located near the Pruitts who lived just across the county line in Frederick Co., Md. (later Montgomery Co., Md.). On June 11, 1765, John Riddle turned in a detailed inventory. Among the creditors of the estate was John Glassford and Company, a prominent mercantile firm of Glasgow, Scotland engaged in the tobacco trade (and many other businesses) in Maryland and Virginia. It's likely that Samuel Pruitt owed John Glassford and Company money he'd borrowed against a future crop. That was common in the South at this time. Some researchers have concluded that Samuel Pruitt's relationship with John Glassford and Company showed "he was a Merchant of a very good type." That's a stretch unless you call every tenant farmer in Maryland and Virginia "merchants of a very good type." John Riddle turned in the final accounting on May 10, 1766. It has been said that both John and Elizabeth Riddle lived into their 90s. Based on the 1790 census, it appears that both were living in Prince George's Co., Md. under the name of John Riddle, Sr. (being the senior John Riddle at that time). Based on a 1794 court petition in Loudoun Co., Va., John Riddle had died intestate in Prince George's Co., Md. by that date. It would appear that Elizabeth (Pruitt) Riddle had died by that date as well. The combination of the 1790 census and the 1794 petition would seem to confirm that Elizabeth (Pruitt) Riddle was in her early 90s when she died (unless the female in the 1790 census was not her); however, based on his birth year of 1708, it's likely that John Riddle died at around age 85.

The Henry Dalton mentioned in Samuel Pruitt's will was born around 1750 to Ann Dalton, an Englishwoman, who was an indentured servant to Ann Martin, the wife of a sea captain. Ann Martin ran a rooming house or hotel in Bladensburg, Md. Court documents describe Henry Dalton as a "base-born" child and, at the age of six months, he was indentured to Samuel Pruitt. Henry seems to have gotten his freedom before he turned 31 because in 1777 he was living at the Redstone Settlement near Brownsville, Pennsylvania, where he was drafted into the militia and fought in the Revolution. He was drafted for another six month's service in 1778 before settling in Bladensburg, Md. again. Then in May 1781 he was drafted once again and, according to his 1832 pension application, was present near Yorktown, Va. when Lord Cornwallis surrendered to General Washington. He eventually moved with his wife Eleanor Russell to Clinton Furnace in Monongalia Co., Va. (now West Virginia) which is where he died in 1836.

Soon after the death of Samuel Pruitt, his three sons, Samuel [II}, Zachariah and John, moved to the area of Halifax Co., Va. that later became Pittsylvania Co. Around the same time, members of other local families, including the Hawkers and Butts, also moved to Halifax Co. To help keep the county citations straight, here is the chronology of the formation of counties in southern Virginia between 1720 and 1777: 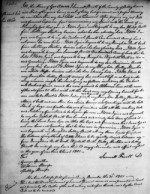 Samuel Pruitt [II] died sometime between Nov. 13, 1801, the date he wrote his last will, and Dec. 21, 1801, the day the will was presented and proved in court. Samuel's wife was not mentioned in the will, suggesting she had already died. Samuel had accumulated a lot of land in Pittsylvania Co.; he gave 100 acres to son Zachariah, 100 acres to son Samuel, and 192 acres to son Japheth. He also lent an undisclosed amount of land to his only unmarried daughter Salley for "her natural life or so long as she may remain single." In the years immediately after Samuel Pruitt [II]'s death, many of his children moved to Georgia. Still later, many of his descendants moved to Texas.