The 1810 personal property tax list for Pittsylvania Co., Va. showed as persons chargeable for the tax, Asa Prewit and R. Parker, 2 white males over age 16, 2 horses, mules, etc., and the amount of tax as 24 cents. Zachariah Prewit, who was listed on the same date, appears immediately after Asa Prewit; this likely means that Zachariah Prewitt lived fairly close to Asa Prewitt. On Nov. 12, 1810 Asa Prewitt went surety on a marriage bond for Richard Parker (Page 49 Marriages by Williams).

Asa Prewett served in the 4th Regiment (Greenhill's) Virginia Militia in the War of 1812. Colonel Greenhill's regiment consisted of seven company sized units from the counties of Pittsylvania, Halifax and Charlotte. It's not known if Asa Prewitt's death in late 1814 or early 1815 was related to this service; however, according to Stuart Lee Butler's book, "A Guide to Virginia Militia Units in the War of 1812," on October 6, 1814, Lt. Col. William C. Greenhill's 4th Regiment, along with several other regiments, was assigned to the 2nd Brigade commanded by Brig. General Joel Leftwich. "These regiments proceeded across the Potomac River into Charles County, Maryland arriving on October 27, 1814. By November 9, 1814, they were encamped at Camp Crossroads, just outside Ellicott's Mills [near Baltimore]. Here, the 6th, 2nd and 3rd brigades encamped until December, when they were finally discharged from duty." Because the British generally removed themselves from Maryland after the Battle of Baltimore ended on September 15, the 4th Regiment would likely not have been involved in any encounter with the enemy. However, the December march from Baltimore back to Richmond and then home to Pittsylvania County would have been grueling and may have contributed to a deterioration in his health.

Asa Prewitt died in Pittsylvania County before March 9, 1815, the date the Collector of the Revenue recorded his 1815 taxable property and marked him as deceased. Based on the speed of the court proceedings that followed, we suspect Asa died a month or two before the collector stopped by. On March 20, the March Court of 1815 appointed Zachariah Prewitt as administrator of Asa's estate and four others as appraisers. The estate appraisal was completed on April 3, 1815 and recorded by the court on May 15, 1815. The final accounting was submitted on March 4, 1817 and recorded by the court on March 17, 1817. Tabitha evidently had died by this time because on Feb. 17, 1817 Robert Ferguson was appointed guardian of Robert, John, William, and Thomas Prewitt, orphans of Asa Prewitt, deceased (Pittsylvania Co. Order Book 18, p. 142).

On June 16, 1817 William Tucker and Thomas Stuart Prewitt, orphans of Asa Prewitt deceased, were bound out to Zachariah Prewitt (Pittsylvania Co. Order Book 18, p. 207). Zachariah Taylor Prewitt raised Thomas and William saying they were sons of a cousin Asa Pruett. According to the 1840 census, Zachariah Pruit was 83 years old and a pensioner for "Revolutionary or Military Services." 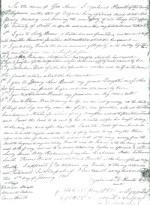 The Will of Zachariah Prewitt

According to his pension payment record, Zachariah Prewitt died on March 23, 1843. His will was written Jan. 16, 1840 and recorded on May 15, 1843 in Pittsylvania Co., Va. His will provided for his daughters Sally Brown, Polly Richardson, Jincy Love, Leahanna Hall, Rhoda Prewitt and Catherine Smith, his son Wiley Prewitt, a granddaughter Mary Ann Prewitt, a grandson Alexander Prewitt and his deceased cousin's two sons Thomas Prewitt and William Prewitt.

According to the 1840 census, Thomas Pruit was living in the Southern District of Pittsylvania Co., Va. In his household were three females, one age 20-30 (presumably Susan) and two under five years of age (presumably Francis and Sarah). Thomas appears next to a Hughey Falling in the census record which likely means he was living on the land he purchased from Elisha D. Waller and Hugh H. Fallen in 1852 (see 1852 Deed). Also, see Pruiett, Part 5 for a copy of the deed between Thomas Pruitt and his three oldest children which also references this piece of land known as the Mann Tract. It appears that Thomas Pruitt and his family lived on this land from the late 1830s until 1900 when it was turned over to Joseph Booth and his new bride, Francis Ann, Thomas's oldest daughter by his first wife, Susan Epperson. As far as we can tell, this 125 acre farm was located in the Kentuck/Laurel Grove area. The indication in the 1852 deed that the land was "on the waters of lower Double Creek" suggests a location south of the current Rt. 729 (Kentuck Road) and about halfway between Laurel Grove and Kentuck. Other evidence suggests it was closer to Laurel Grove based on 1880 and 1900 descriptions of the census enumeration districts in which the Pruitts resided and by comparing an 1881 Danville City Directory list of farmers residing in the Laurel Grove area to 1880 and 1900 census records. Some of the Laurel Grove farmers lived near the Pruitts according to this analysis while no farmers from other areas were close neighbors. We also found additional evidence that places the location of the farm on modern day Rt. 729, about a mile east of Kentuck and about five miles south and west of Laurel Grove. See Pruiett, Part 7 for more information about this evidence.

At the time of the 1850 census, the Thomas and Susan Pruett household appeared as follows:

The Pruett family's last name was spelled three different ways on this census record. Thomas's last name appears to be "Pruiett." This is probably the first time this spelling of the name was used and is likely just a mistake by the enumerator since Thomas could not read or write. The last name was also spelled "Pruet" and "Pruett."

Two households away from Thomas Pruett was a 45-year-old black man named Lewis Ronalds who lived with the William Slayton family. It's interesting to note that 1850 Property tax records for Pittsylvania Co., Va. listed Thomas S. Pruett and Lewis Reynolds FN [Free Negro] as a single taxable entity. Between 1835 (when Thomas first appeared in Property tax records) and 1847, Thomas Prewett/Pruett was usually shown as the owner of one slave and was generally the only member of the Pruitt family to own a slave. In 1848, 1849 and 1850, Thomas did not own slaves, but as shown in the 1850 property tax record, he seemingly worked side-by-side with Mr. Reynolds, a "Free Negro." We do not know if Lewis Reynolds had previously been owned by Thomas Pruett. We do know, based on the 1850 Slave Schedules, that Elisha Waller and Hugh Fallen, the individuals from whom Thomas bought his 143-acre parcel in 1852 (see above), and from whom he likely leased that land for the 12+ years prior, were the owners of significant numbers of slaves.

William C. Pruett married Frances P. Epperson on Nov. 8, 1834. Surety, Fountain Epperson. According to the 1840 census, William Pruit was living in the Southern District of Pittsylvania Co., Va. In his household were two males under 5 years of age (perhaps sons who died before the 1850 census) and two females, one age 20-30 (presumably Frances or "Fanny") and one under five years of age (presumably Sarah). Thomas Pruett, William's brother, appears on the preceding page of the 1840 census, probably indicating that the brothers lived close to each other.

At the time of the 1850 census, the William and Fanny Pruet household appeared as follows: