Shortly after I entered Nursing School, the bombing of Pearl Harbor occurred. As future nurses, we were all completely horrified and felt it was almost unbelievable. How could they do such a thing! We listened to the radio every chance we had. Not too long afterwards, our Director of Nurses, Mary Cutler, called us together for a meeting on the sun roof of our building to tell us that any young lady who wished to be married to a young man who was going into the service, would be able to do so. She was the first Director in the city to do this, but the others soon followed suit. At this time, however, marriage was the farthest thing from my mind. I did have a boyfriend but it was not serious. Little did I know of the events that would take place in 1942 and 1943.

During my second year of school I went to Tennessee on my summer vacation after capping. I visited all my Aunts and Uncles, my Dad's brothers and sisters. When it was time to return to my Dad's home in Kentucky, and from there to Cincinnati, my cousin Louise Treece, who was three years younger than me, persuaded her Mom and Dad to let her leave home and come with me. She was sixteen and I was nineteen. We stayed with my Dad and the family for the weekend and on Monday evening, Labor Day, we boarded a bus for Cincinnati, arriving in the city around midnight. We walked out of the station and I turned the wrong way. After walking a few steps, I realized my mistake and turned around to go the other way. Suddenly, a young man stepped away from the station and grabbed my suitcase saying, "Taxi lady." This turned out to be my future husband's brother, Bob. Ralph Pruiett, Bob's friend, Bob Vaske and Bob Pruiett had been leaning in front of the station. Looking for some excitement, maybe? After some hesitation on my part, we proceeded to an all-night coffee shop nearby, where we talked and got to know each other a bit. This could not and would not have happened if my cousin Louise had not been with me. Ralph and I were impressed with each other and our commonalities, i.e., our birthdays were close together, our initials were the same etc. I could go on and on with the things we had in common. We arrived at Rose and Elmer's house about 2:30 AM and you can imagine Rose's reaction to my explanation for arriving at this ungodly hour and in the company of three strange young men, to say nothing of the fact that she didn't know I was bringing Louise home with me. It took some tall explaining to get through that mess. This all happened on Labor Day in 1942. Ralph and I had a date the following Thursday evening, where we were joined by the two Bobs and Louise. We had dinner and sat around drinking cokes for quite a while. The following Saturday, I was spending the weekend with my cousin Christine Greer and her two small children (Fritz was in the Navy). Ralph came out with his brother, Bob and we spent the better part of the night sitting at the kitchen table drinking coffee and talking. Guess you could say it was "love at first sight." Bob was forced to sit in the living room talking to Chris. About 6:30 or 7:00 AM, Ralph had to leave to prepare to catch a train back to California. I believe Chris had gone to bed and Bob was sleeping on the couch at this time. Ralph had to waken him to drive them home. Thus began our letter writing romance. I think Ralph sent me cards from every stop he made on his way back to camp.

Meantime, about a week later, my Grandfather Parker, who was ill at the time of my visit to Tennessee, died. My Uncle Bryan sent me a telegram that said, "Dad died." I was on duty at the time and our Assistant Director of Nurses Nell Bohannon, came to me and pulled me into a private office where she gave me the sad news that my Father had died. When she showed me the telegram, I was relieved to inform her that it was my Grandfather and not my Dad. Nevertheless, I contacted my Uncle Roscoe in Michigan and arranged for him to pick me up on Reading Road to go to Grandpa's funeral. Uncle Jonah drove me there. When I returned to the hospital I found a bunch of cards from Ralph. Guess you could say we were hooked on each other from the start and that our romance would last for almost 57 years. Sadly, Ralph died on March 12, 2000. 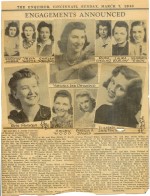 By November we were engaged and Ralph sent the rings home to his Dad to present the Engagement Ring to me for my birthday on January 9, 1943. We planned to be married in June but Ralph's furlough kept getting delayed. We were married on July 10, 1943 and the rest as you know is history.

Shortly after we were married, Muriel met her future husband and, while Ralph was home on leave for our first anniversary, she and Bob Rakel were married with Ralph and me as their attendants. Their wedding date was July 12, 1944.