The Powell Valley of Tennessee starts in the Cumberland Mountains and runs west to LaFollette (follows today's Rt. 63). Here Barnett J. (Barney) Parker and Louisa Jane (Wagoner) Parker chose to raise their family. After spending at least 20 years in Claiborne County, Barney and Louisa moved further west to Campbell County where, in 1915, Barney took a job as superintendent of the Free Soil Farm in Caryville. They lived there about 14 years. The farm consisted of around 1200 acres of grazing and agricultural lands. Barney and Louisa lived in the big house and there were several smaller houses on the property for other families. A few clues as to the location of the Farm are contained in this newspaper article from 1900 that indicates it was "near the town of Caryville, thru which passes the greater Southern trunk line Railroad" and that 600 of the 1200 acres "lies in the beautiful valley at the base of the rugged Cumberland Mountains that picturesquely stands in the background." Based on this article, we were able to find the 1910 deed of sale (Harry S. Rothschild to James G. Sterchi and J. L. Deaver) in Tennessee archives. That led us to the 1882 deed of sale (Wilhelm and Marie Boeing to Sigmond Rothschild) along with an 1882 plat associated with both the 1882 and 1910 deeds. Based on the plat and deed descriptions, we are confident that the Free Soil Farm encompassed a great deal of the land west, north and east of the old Caryville Depot and Hotel. The main "Residence" of the farm, described in the deeds as Carey mansion, was located within the bounds of the cleared land northeast of Caryville. In addition, the plat shows an "Old House" just to the west of the Residence with a cemetery near it. That appears to be the present-day Carey Cemetery just off Bruce Gap Road where William Carey, Thomas Wheeler and many family members are buried. Below is a representation of the Free Soil Farm location within Campbell County on both a 2020 map of the Caryville area and an 1885 map.

While the Free Soil Farm initially covered over 1200 acres in and around Caryville, its various owners had sold off some of the land over the years to coal companies and residents of the town that grew up along the Southern Railway. By the time of the 1910 sale, the Farm encompassed just over 1100 acres and sold for $30,000, a tidy sum in those days. At first, the town was called Wheeler's Station and then Careyville. The name got shortened to Caryville after the Civil War. Eighty-six (86) percent of the cleared agricultural land was north and east of the town. William Carey had been a significant landowner in Campbell County, but his ownership of the Free Soil Farm began after the death of Thomas Wheeler in 1851. William Carey had married Thomas Wheeler's daughter, Melinda Emily Wheeler, in 1832.

The Free Soil Farm employed up to 50 people, had a blacksmith shop, saw mill, coal mine and a store for the employees. This 2015 article from the Oak Ridger provides more details about the early days of the farm. According to the author (see page 3), the Wheelers had freed their slaves before the Civil War and had set aside 1000 acres where their freed slaves could live and work. This provenance for the name of the Free Soil Farm makes more sense than the one contained in the earlier 1900 newspaper article. Mr. Carey and Mr. Wheeler were also partners in a freight line delivering passengers and goods to Middlesboro, Ky. It's likely that this direct line to Middlesboro was how Milton K. Parker got to his coal mining job in Bell Co., Ky. many years later. See Parker, Part 3, for more on this. 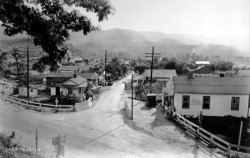 Looking at the 2020 and 1885 maps of the Free Soil Farm and the Caryville area, one feature stands out, Cove Lake which was created in 1936 when the Tennessee Valley Authority completed the Norris Dam on the Clinch River and the Caryville Dam on Cove Creek. The land on which the Carey mansion stood was likely incorporated into Cove Lake State Park and may even be under the lake itself. Two highways near Caryville, Routes 25 and 63, had to be rerouted around the new lake and many buildings in the path of rising lake waters were condemned or moved. The picture to the right was taken in 1934 before the creation of Cove Lake. Tennessee Archives describes this scene as the "[i]ntersection where the Oneida Highway [Old Tennessee 63] goes through. Highway 25 W is in the foreground." They also state, "I-75 now cuts through mid-background." Note that the traffic sign at the intersection says to turn right to get to Pioneer, Huntsville and Oneida; you would have traveled north out of Caryville on Highway 63 to get to those destinations. In a newspaper article a few years later (see the notes under linked pictures to the right), it was stated that, "[t]he lake took all these houses except [one]." Many of the individuals affected by the rising lake were quite prominent members of the Caryville community including the Rev. J. W. Wright, Milton Parker's mentor, and the church he pastored, First Baptist of Caryville. Today, you would probably have to stand in the middle of Cove Lake, facing west, to take this picture. Most of the land in the picture would have been part of the Free Soil Farm before being sold off in small lots to local residents and businesses.

While some Parker family members chose to work on the Free Soil Farm in the 1920s, others moved on to other endeavors. What follows is a rundown of the early years for each of Barney and Louisa Parker's children. Shortly after their son Carl was born in Tennessee, Roscoe moved his family to Monroe Co., Mich. where he worked as a fireman in a paper mill factory according to the 1920 census. By 1930 two more sons had been born and Roscoe was now working in a gas plant. Cora Ellison Parker died in 1932 in Monroe Co., Mich. In 1934 Uncle Roscoe married Cordelia Cox (Axie) Baldwin, a widow, who became a good mother to his three sons. Based on the 1940 census Roscoe was back at the paper mill working as a welder. James Roscoe Parker died on June 7, 1973 in Zanesville, Ohio. Axie Parker died on March 15, 1982. Both are buried at Jacksboro City Cemetery in Campbell Co., Tenn. Bryan Parker married Teresa (Ressie) Webb in the early 1920s. The 1920 census indicates he was living as a boarder with his brother Roscoe in Monroe Co., Mich. where he worked in the box shop at the paper mill. That work must not have suited him because he returned to Campbell County shortly after the census was taken and worked on the Free Soil Farm for the next few years. By 1930 he was still farming on rented land. However, by 1940 Bryan was working as a janitor at the Campbell County Courthouse in Jacksboro. It appears he was still working at the Courthouse in 1958 when he died from an injury sustained in a fall at the Courthouse (see Death Certificate). Children of this marriage were:

Roxanne (Roxie) Parker married Silas Treece in Claiborne Co., Tenn. on August 18, 1918. According to his draft registration card (dated Sept. 12, 1918), Silas Jefferson Treece was born on November 18, 1900 and he and Roxy were living in Speedwell, Claiborne Co., Tenn. where he was a self-employed farmer. We know the family soon moved to Campbell County where Silas worked on the Free Soil Farm. By 1930 Silas and Roxy lived next door to Barney and Louisa Parker in Caryville and Silas listed his occupation as Laborer in a gas plant. Ten years later, Silas was a coal miner in Campbell County according to the 1940 census. Silas Treece died on Feb. 15, 1967. Roxie (Parker) Treece died on Dec. 30, 1983. Both are buried at Jacksboro City Cemetery in Campbell Co., Tenn. Children of Silas and Roxanne Treece were: Ditmus Thomas Parker married Laura Presnell on Dec. 24, 1924 in Campbell Co., Tenn. (see Marriage Record). Laura was born on Jan. 20, 1909 to Dave and Minnie Presnell of Caryville, Tenn. When they married, Laura was 15 and Uncle Dit was 16. Their son, Russell, was 18 months old when Dit had his 18th birthday. Children of this marriage were:

Years later, Helen Parker Tallent wrote an article, The Parkers of Bruce Gap, about life growing up in Campbell Co., Tenn. based on the recollections of her mother and aunt. It's a wonderful look into everyday life in east Tennessee in the 1920s and later.