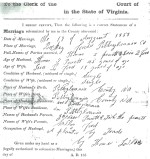 Susan (Epperson) Pruett must have died before 1858. On Aug. 19, 1858, Thomas S. Pruett married Icyphenia B. Ford. The marriage document indicated his new wife's name was "Isia B. Ford" and that she was the daughter of "Salley Ford." The marriage took place at "Beckey Ford's in Pittsylvania County." It also indicated that Thomas S. Pruett was the son of Zachariah and Tabitha Pruett. While Tabitha was his mother, Zachariah was the relative who raised him after his father and mother died. Children of Thomas S. and Icyphenia B. Pruett were:

While Icyphenia B. Ford's marriage document indicated that her mother was Salley Ford, the identity of her father and her relationship to Beckey Ford were not indicated. However, we now know, based on the will of William Jeffreys, a Revolutionary War veteran, that Sally Ford's parents were Elisha Ford, another Revolutionary War veteran, and Rebecca (Haley) Ford. William Jeffreys' Will was probated on June 16, 1845. We also have a pension file record indicating that William Jeffreys received his pension regularly until March 1845, but not in September 1845 or thereafter. An "X" appears between his first and last names on the file and another "X" in a column just after his last pension payment was recorded.

It's of interest to note that Elisha Ford appears on the same page of the 1840 census as Thomas Pruett's brother, William Pruit, and just one page removed from Thomas S. Pruett. Icyphenia Ford was born in June 1840 according to the 1900 census. The 1860 census shows Rebecca Ford, age 72, as the head of a household with Sallie F. Ford, age 50, living with her. [We can't be sure whether "F" was Sally's middle initial or an attempt to write her last name before the enumerator remembered to use a ditto mark.] Thus, Rebecca Ford (Elisha Ford's wife) would have been 52 in 1840 and was certainly the female, age 50-60, living in Elisha Ford's household. Was Sally Ford also in that household? Sally would have been 30 years old in 1840 and there were two women living in Elisha Ford's household who could have been that age. However, despite the fact that Icyphenia was born in June 1840, there was no daughter under age 5 living in Elisha Ford's household. By strict interpretation of the rules, if Icyphenia was born after June 1, 1840, she should not have been listed. Some enumerators adhered to that rule, some didn't. Unfortunately, there is no date on the 1840 Census for the Southern District of Pittsylvania County. We just don't know whether Sally was listed in Elisha's household and, if so, if she was extremely pregnant or holding an infant in her arms when the enumerator arrived at the house. Another possibility is that Sally Ford was a member of William Jeffreys' household in 1840. Could she have been a caretaker of the aging Revolutionary War veteran. That would explain why he wrote a will on December 13, 1841 stipulating that Sally Ford was to receive "the land whereupon I now live together with all the remaining part of my estate whatsoever, to her and her heirs forever." Unfortunately, William Jeffreys does not appear in the 1840 census. In addition, we have been unable to find Rebecca Ford, Sally Ford or Icyphenia Ford in the 1850 census. Perhaps they were living on William Jeffreys' "remote" property and the enumerator failed to find them in 1850 like he failed to find William Jeffreys in 1840. William Jeffreys, or perhaps a frequent visitor to his home, are likely candidates to be the father of Icyphenia Ford. However, we'll need more evidence to determine the complete story of Icyphenia's birth. 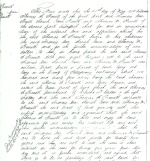 On May 30, 1859, Thomas S. Prewett recorded a deed in which he "doth give, grant, bargain and sell" a one hundred and twenty-five acre tract of land, "known and called the Mann tract," to his children from his first marriage, Francis Ann Pruett, Sarah Jane Pruett and Thomas M. Pruett. He described the tract as "the land whereon the said Thomas S. Prewett now lives" and that he had purchased the land from Elisha D. Waller and Hugh Fallen. Thomas S. Prewett stipulated that he was "to hold and enjoy the land aforesaid for and during his natural life" and that his children "are to hold the said land jointly for twenty-five years and they are not to sell the same or their interest in the same for twenty-five years ... and then they may dispose of the same as they may think proper."

It's not entirely clear when the 25 year holding period was to commence for the children, but it seems likely it was meant to start when Thomas S. Prewett died. It's of interest to note that Icyphenia and the youngest children lived on the land long after Thomas died in 1873. Adding twenty-five years to 1873 means the children had to hold the land until 1898 at which time they could "dispose of the same as they may think proper." As it happened, the land was turned over (sold?) to Joseph Booth and his wife Francis Ann Pruitt, Thomas's eldest daughter by his first wife, in November 1900. There are indications that Sarah Jane Pruitt and her husband William M. Myers sold their 1/3 interest in the land to Icyphenia on August 8, 1874. It's not known if Thomas M. Pruitt did the same at that time or later. See Pruiett, Part 7 for more on this transaction.

At the time of the 1860 census, Thomas and Icyphenia Pruett had the following children and others living in their household:

Sometime between 1850 and 1860, William C. and Frances Pruett moved to Halifax County, just across the Pittsylvania County line. Their old homestead is located on Mercy Seat Church Road. William, Fannie and some of their descendants are buried in the cemetery near the homestead.


The 1860 census listed a son, Nathaniel, age 23, living with William C. and Frances Pruett. Nathaniel was not listed on their 1850 census record.