Michael Turner, Jr.'s brother Isaac Turner and his wife Sarah moved to nearby Hamilton Co., Ohio around 1816. They had at least six children including sons Michael, Matthias and Isaac Turner and daughters Electa, Rachel and Serena. Isaac's son Michael, born around 1809, married Nancy Flinn on Dec. 9, 1835 (see marriage record). In 1868, one of Michael's sons, James J. Turner, married Mary A. Forbes, daughter of Ebenezer and Phoebe Forbes (see Turner, Part 5). As it happens, in 1864 George Washington Turner, son of Andrew Jackson Turner and grandson of Michael Turner, Jr., married Martha Melissa Forbes, another daughter of Ebenezer and Phoebe Forbes. It's this latter Turner-Forbes union that is in our line.

Daniel Turner, son of Michael Turner, Jr., married Susan Malott on Nov. 7, 1827 in Clermont Co., Ohio. According to histories of Clermont County, Susan Malott was born on Jan. 27, 1811 and was the daughter of Peter Malott and Martha B. (Dumford) Malott. The 1830 census shows Michael Turner, Jr., Daniel Turner and at least one Beltz living in Clermont Co., Ohio. In addition, Martha Malott was the head of a household with no adult male, suggesting that she was still unmarried after her husband died in 1826. William Dumford, the husband of Michael Turner's daughter, Elizabeth, lived near Martha Malott. William Dumford's relationship to Martha (Dumford) Malott is not known.

The 1860, 1870 and 1880 censuses list Martha (Dumford/Malott/Malott/Troy) Scammahorn living in Wayne Township, Clermont Co., Ohio. It's likely that Eben Forbes Turner met her many times when he was young and knew about her long relationship with the Turner family before her death on May 31, 1883 when he was just seventeen years old. Over the years, he may have gotten confused about some of the details and the result was her showing up as a wife of Michael Turner, Jr. in the family history he "outlined, from memory," to William Ellis Pruiett in 1924.

Likely living with Michael Turner, Jr. was his wife Nancy, age 40-50, three or four children from his first marriage, five or six other children and an unknown female, age 60-70. We believe this unknown female may have been Jane Warner who was listed as a close neighbor in the 1830 census and that she may have been the mother of Michael Turner, Jr.'s wife Nancy. She appears to have been around ten years older than she was in 1830 and she no longer had a distinct listing in the 1840 census. We also note that one of Michael Turner's children listed in the 1850 census was named Nancy Jane and she was born in 1832. While none of this is definitive evidence, it will be worth exploring. Another question to be answered is whether all of the children listed in the 1850 census were children of Michael Turner, Jr. Could Jane have brought a child or two or three into the family from a previous marriage? We'll look into that issue below.

Based on the 1850 census (see Turner, Part 4), Michael Turner, Jr.'s property partition and other records, here are six of the children we believe were born to Michael Turner, Jr. and his second wife, Nancy, or were brought into their household from a previous marriage or, in one case, may have been a child of Elizabeth (Beltz) Turner:

When we look at the two lists of nineteen children who were born to Michael Turner, Jr. or lived at various times in his household (see above and previous page), we are not completely sure of the parentage of at least three of them. If Melvina Turner was born on May 21, 1823 as her death certificate indicated, she could have been born to Elizabeth Turner a little more than a year before she died or to Nancy LNU in a previous marriage. It's not likely that she was born to Michael and Nancy Turner since she was born before Elizabeth died. If Eleanor Turner was born on Feb. 15, 1825, as records indicate, she could not have been the daughter of Elizabeth since she was born after her death and she could not have been the daughter of Michael and Nancy since she was born only five months after Elizabeth's death (except through an extra-marital liaison, of course). If Eleanor was a child brought into Michael Turner, Jr.'s household after his marriage to Nancy, then could one or two others have been born to Nancy and an unknown spouse? At the moment we are not in a position to answer this question, but this is an issue we will examine further as more records are uncovered.

One avenue for determining the parents of some of the children would be to look at death certificates that name the father and mother of the deceased. Fortunately, we have a few of those. Amanda Carpenter's death record in Brown Co., Ohio (see link on previous page) indicates her father was Michael Turner, but her mother was unknown. Amanda Carpenter has generally been listed as the last child of Michael and Elizabeth Turner, but it's possible she was born to Nancy LNU before her marriage to Michael Turner. Harriet (Turner) Dalton, Nancy Jane (Turner) (Adams) Marriott, and Emanuel Turner lived for many years in Chicago and all three died there. Harriet Dalton's 1912 Cook Co., Ill. death certificate (see link above) lists her parents as E. Turner and Nancy Turner, both born in Ohio. Nancy Jane Marriott's death certificate also listed her father as E. Turner, this time born in Germany, and mother unknown. Emanuel Turner's death certificate does not provide a name for his father, born in Germany, or his mother, born in England. Thus, two of these latter three death certificates indicate that the father's name was E. Turner (either born in Germany or Ohio) and one indicates the mother's name was Nancy (born in Ohio). Shortly after the death of Michael Turner, Jr., a Guardian's Bond was presented in the Probate Court in Clermont Co., Ohio, for Emanuel Turner indicating that he was a "minor child of Michael Turner deceased." This should mean that Emanuel Turner was a natural child of Michael Turner, but it probably doesn't rule out the possibility that he was his adopted son. All of these documents give us clues, but no definitive answers, as to the parentage of the children living with Michael Turner after 1840.

By 1850, the Turners had many significant parcels of land in Clermont County including Michael Turner, Jr.'s 220 acres in Union Township (originally purchased in 1817) just south of the East Fork of the Little Miami River and another 100 acres north of the East Fork in Stonelick Township; Daniel Turner's 184 acres in Union Township; Andrew Jackson Turner's three parcels in Stonelick Township of 238 acres, 71 acres and 50 acres; and finally, 100 acres in Union Township just south of Michael Turner's 220 acre parcel that belonged to either Andrew Jackson Turner or John Turner. See the map linked to the image to the right to see where each of these properties was located (red dots mark the names of the Turners who owned the property; precise locations are not identified). It's said that Daniel Turner had another 200 acres in Miami Township, just east of Perins Mills (Perintown); however, this parcel does not appear on this 1850 map. 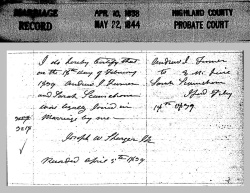 Andrew Jackson Turner, son of Michael Turner and Elizabeth Beltz, married Sarah Scammahorn on February 18, 1839 in Highland Co., Ohio. His brother William H. Turner married Elizabeth Scammahorn on December 10, 1841 in Highland Co., Ohio. Sarah and Elizabeth Scammahorn were the daughters of Isaac and Sarah Scammahorn. Isaac was born around 1785 in Washington Co., Penn. As noted above, after his wife Sarah died, Isaac Scammahorn married Martha (Dumford) Malott, the mother of Susan Malott who married Daniel Turner, another son of Michael Turner, on Nov. 7, 1827 in Clermont Co., Ohio. It was a small world in southwestern Ohio in the early to mid-1800s. Isaac Scammahorn's father was Lucas Schermerhorn, Jr. who was born around 1750 in New York. The Scammahorns and Turners may have met when each lived in Pennsylvania in the early 1800s prior to both families moving to southwestern Ohio.