Introduction - How Our Surname Evolved Over Time

In the narrative that follows, the various spellings of Pruiett reflect differences in the source documents. The family name was spelled "Pruitt" by four generations, from the first Samuel Pruitt around 1700 to Asa Prewitt/Pruitt in the early 1800s. During the 1800s, very few in the family could read or write. This explains the many different spellings of the name during this period including Prewitt, Prewett, Pruit, Pruitt, Pruet and Pruett. Family members signed many of their documents by making an X. Beginning around 1870, the family was spelling the name "Pruett" on a fairly consistent basis as demonstrated on the marriage license of Asa W. Pruett and Alice Climer dated Dec. 31, 1891. After moving to Cincinnati, Ohio in the late 1890s, however, the family, for the most part, made the decision to change the spelling to its current form. Isaac Pruiett's death record in February 1899 is the first document we've found that reflects the spelling as Pruiett. In addition, this document narrows the time frame for the Pruiett move from Virginia to Ohio since it indicates that Isaac died in Cincinnati on Feb. 20, 1899 and was born in Virginia 1 year, 7 months and 17 days before his death. Charles Pruiett's 1905 report card also shows the spelling as Pruiett, as does William E. Pruiett's 1915 Indiana marriage license. Although the 1900 and 1910 census records use other spellings, that could be due to miscommunication with the enumerators. Both Asa's and William's 1920 census records have the current spelling. Also, William Ellis Pruiett's 1917 World War I draft registration card shows the current spelling. 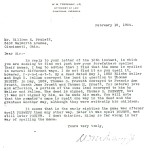 In 1924 William Ellis Pruiett received a letter from W. M. Tredway, a Chatham, Va. attorney, in which he discussed the various spellings of the family name. In his letter to the attorney, William Pruiett had spelled his name "Pruiett" and the attorney responded that he could not find that spelling in any of the family records he found. Despite this, William Ellis Pruiett decided the family would continue to use the name Pruiett. William's father, Acy Pruiett, died in 1924. On his death certificate the name was spelled Pruiett, although in a couple of places the "i" was inserted as a correction.

Our first confirmed Pruiett ancestor was Samuel Pruitt who was born around 1700. Some sources give Samuel Pruitt's birth year as 1684 (perhaps an extrapolation of his birth year based on the false belief that his first son, Samuel, Jr., was born in 1705). Most sources, however, indicate that he was born on April 4, 1700 in Prince George's Co., Md. We have not seen a primary record that confirms the date and place of Samuel Pruitt's birth (however, see below for a possible birth record). At this time, the names of the parents of Samuel Pruitt are not known. Some sources indicate his father was John Pruitt who was born in England in 1658 and his mother was Sarah Lessene who was born in England in 1662. Other sources indicate that John Pruitt and Sarah Lessene were born in Virginia, even that John Pruitt was born on Tangier Island. The Tangier Island connection is highly doubtful since the first confirmed settlement of Tangier Island was by Joseph Crockett and his family in 1778 and the first Pruitt to inhabit Tangier Island arrived in the late 1700s. However, we have no historical evidence that John Pruitt and Sarah Lessene were Samuel Pruitt's parents, let alone that Thomas Prewitt (The Immigrant) who is frequently named as the father of John Pruitt, was his grandfather. For a more thorough discussion of Thomas Prewitt, see The Mythology of Thomas Prewitt (The Immigrant). There were several Pruitt families in Virginia in the late 1600s and it is not clear how to sort out the various relationships, although we are making some progress using Y-DNA analysis.

Just to add one more wrinkle, there is a record of a Samuell Prewtt/Prentt born in Northumberland Co., Va. to Rosamond on Feb. 1, 1700. This is intriguing because of John Hawker's early connection to Northumberland County and subsequent migration across the Potomac River to St. Mary's Co., Md. and then Prince George's Co., Md. (see Hawker for more). It may be that Samuel Pruitt followed that same migratory route, arriving in Prince George's County in the early 1700s where he married John Hawker's granddaughter, Elizabeth Hawker around 1720. For a more thorough analysis of the possible connection of this birth to our Pruiett line and our probable connection to another immigrant family, see The Swenys of the Tidewater region of Virginia.

The Pruitts of Maryland

It is commonly believed that Samuel Pruitt and Elizabeth Hawker were married in 1720 in Prince George's Co., Md.; however, there is no known historical record to confirm the date or location. Elizabeth Hawker was born on Dec. 14, 1701 in Prince George's Co., Md. She was the daughter of Robert Hocker and Amy Selby. For more on the Hocker/Hawker lineage, see the Hawker family. There are several variations of the names of the children born to Samuel and Elizabeth Pruitt. This area needs more investigation, but here is a list that makes the most sense based on historical records:

The Pruitts did not leave much of a footprint in Maryland records in the early to mid-1700s. No Pruitt marriage records have appeared so far, except for Priscilla Pruitt's marriage to William Duvall (see this 1940 transcription of the Rock Creek parish church record). The only other records uncovered so far are the 1733 List of Taxables below and Samuel Pruitt's lease agreement, last will and accounting documents on Pruiett, Part 2. With this in mind, there is a question that's been raised by some researchers as to whether Margaret Pruitt existed and whether she or a Margaret Snowden married Philip Hocker. Since no marriage record has been found, we have to rely on Philip Hocker's last will and a deed recorded in Frederick Co., Md. to make a subjective determination. The primary (and perhaps only) argument in favor of Philip Hocker marrying a Margaret Snowden is the fact that he left his son, Nicholas Hocker/Hawker, more than one hundred acres of a tract of land called Snowden's Manner [Manor] Enlarged. We believe researchers originally deduced that his wife must have been a Snowden for him to possess this tract. Now we know that he purchased the land, "part of a tract of land called Snowdens manor Enlarged," from Thomas, Samuel and John Snowden in 1769. While this removes the principle argument in favor of marrying a Snowden, it does not prove that Margaret Pruitt was his wife. Some researchers have indicated that Philip Hocker's son, Samuel, was named Samuel Pruitt Hocker, but we have not seen a record that substantiates this claim. At this time, we believe the weight of evidence points away from Philip Hocker marrying a Margaret Snowden, and we have tentatively determined that the evidence points towards Margaret Pruitt. As always, this kind of determination is subject to change as more evidence comes to light. Certainly, the geographic proximity of the two families, as the record below suggests, makes a Hocker-Pruitt union a plausible presumption.