The following narrative was developed from numerous primary and secondary sources. While some of the secondary sources provide contradictory information, what follows is how we see the Hocker/Hawker generations unfolding from John Hocker and Elizabeth Wright who were married around 1671 to the marriages of two of their descendents - Elizabeth Hawker, daughter of Robert Hawker and Amy Selby, to Samuel Pruitt [I] around 1720 and, seventy years later, another Elizabeth Hawker, daughter of Ambrose Cook Hawker and Lydia Butt, to William Seal, Jr. in 1790. John Hocker, whose family was likely of German ancestry, is said to have been born around 1635 in Wales based on family accounts handed down through the generations. Many Germans migrated to Wales to work in the mines and the Hockers could have been part of that migration. Some accounts say that John Hocker was kidnapped in Wales and sold to a ship's captain who was about to leave for Virginia. There is little research, however, to corroborate this Wales connection. The first confirmed record for a John Hocker/Hawker is a 1651 patent by Thomas Orley to obtain 100 acres in Northumberland Co., Va. for transporting two individuals including John Hawkers to colonial Virginia. Northumberland Co., Va. is just across the Potomac River from St. Mary's Co., Md. where, a few years later, we find John Hocker mentioned along with his wife in Thomas Diniard's 1659 last will. Based on the will, we know that John Hocker was married before 1659. Some sources indicate that he married Mary Greene who was born around 1637 and was a presumed daughter of Maryland's Governor Thomas Greene. Unfortunately, we can find no evidence to support the name of his first wife. Thomas Diniard's will indicates that John Hocker's first wife was named "Furfer Hocker," but that may be a transcription error. It is not known what happened to his first wife, but in 1671 John Hocker is said to have married Elizabeth Wright in Annapolis, Anne Arundel Co., Md. According to these reports, Elizabeth was the daughter of John Wright and Barbara Wright. We know that John, Barbara and Elizabeth Wright immigrated to Maryland in 1671 along with Thomas, William and Richard Wright based on a compilation of records titled "The Early Settlers of Maryland: an Index to Names of Immigrants, Compiled from Records of Land Patents, 1633-1680, in the Hall of Records, Annapolis, Maryland." The story told by Hocker/Hawker descendants is that the Wrights were Scottish immigrants and that John Hocker paid for their transportation with the agreement that he could marry their daughter.

While John and Elizabeth (Wright) Hocker seem to be the prime contenders as the first Hockers/Hawkers of our line in colonial America, another contender is being considered by some researchers: Thomas Hocker and Patience Needham. There are many inconsistencies in the accounts of these two individuals including their ages, when and where they were married and who they married. Some even say Thomas was just another name used by John Hocker. Others suggest that John and Thomas were brothers. We also find accounts of Thomas and Patience living in several different locations during widely varying time periods. At this time, we find no records that place Thomas Hocker and Patience Needham in either St. Mary's or Prince George's County, Maryland in the late 1600s, making it difficult to identify them as the parents of the four individuals generally listed as the children of John and Elizabeth Hocker.

While it's not known whether John and his first wife had any children, most sources indicate, without much corroboration, that John Hocker and Elizabeth (Wright) Hocker were the parents of the following four individuals whose lives are well-documented in colonial Maryland records:

Because their birth dates are estimates and their parents are not documented in any records we have found, it may be that not all the individuals above were siblings. However, we are confident, based on what we know about their later lives, that they were related and, for now, like others, assume that John Hocker and Elizabeth Wright were their parents. We also know, based on well-documented family trees, that the Pruiett side of our family can trace its ancestry back to Robert Hocker/Hawker and the Parker side can trace its ancestry back to Nicholas Hocker/Hawker.

Amy Selby, the wife of Robert Hocker, was born around 1679 in Prince George's Co., Md., and was the daughter of William Selby, born in Maryland in 1656. Robert Hocker and Amy Selby were married before Nov. 5, 1698 (the date her father's last will was written - see below) and had the following children:

Much of what we know about Robert Hocker and Amy Selby comes from Robert Hocker's 1711 will. From the will, we know the names and birth dates of their four children, the name of Amy's father, and the fact that Robert Hocker received a good deal of land from William Selby when he married Amy. This latter fact is also corroborated by William Selby's 1698 will (see the "Sixthly" provision), proved on Feb. 25, 1699 (per Gregorian calendar). From Robert Hocker's will we also learn that Amy died before Robert, sometime between the birth of daughter Amy in July 1708 and the death of Robert around the end of April or early May of 1711. The will provides that the executor, Thomas Brook(e), Jr. is "to take into his care my dear babes and their estates beseeching him ... to deliver each their part when they arrive at the age within mentioned...." Thomas Brooke was a man of some prominence in Maryland, so it is unlikely, but not out of the question, that he raised the four children. None of Robert's three siblings were mentioned in the will, even as witnesses, so it is not obvious that any of them stepped up to raise the kids. Perhaps probate records will reveal how the children spent the next ten or so years of their lives until they "came of age."

Elizabeth Hawker, the daughter of Robert Hocker and Amy Selby, married Samuel Pruitt I in Prince George's Co., Md. around 1720. For more on the Pruiett genealogy, go to Pruiett, Part 1.

Nicholas Hocker, the son of John Hocker and Elizabeth Wright, married Sophia Sim around 1710 in Anne Arundel Co., Md. One source indicates she was born in Maryland in 1690. Another says she was christened in Scotland on July 6, 1684. Nicholas Hocker and Sophia Sim had the following children:

Sophia Sim died before 1735 and Nicholas Hawker then married a daughter of Ambrose Cook in 1735; her first name is not known at this time. Nicholas Hawker and his new wife had the following child:

In 1759 Ambrose Cook Hawker married Lydia Butt, the daughter of Samuel Butt and Elizabeth Swearingen of Frederick Co., Md. In the late 1780s, the couple and their children moved to Pittsylvania Co., Va. They had the following children:

It's interesting to note that several family names appear again and again in the everyday lives of the Hawkers in both Maryland and Pittsylvania Co., Va. Many members of these families moved to Pittsylvania County during the same time period, between the early 1760s and the late 1780s. This group included the Hawkers, Pruitts, Butts, Swearingens, Riddles and, to a lesser extent, DuValls. It's clear that they all lived relatively close to each other in Maryland and worshipped at the same churches. These family names appear frequently in the surviving records from Queen Anne Parish (established in 1704, with St. Barnabas as the parish church), or Prince George's Parish (established in 1726, with Rock Creek as the parish church). While the Pruitts do not appear as often as others, it's likely that many of them met future husbands and wives in church-related activities. Colonial life often revolved around the Anglican Church and these families were no different than others at the time. 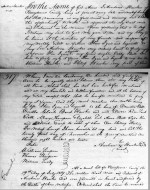 Ambrose Cook Hawker, the father of Elizabeth (Hawker) Seals, died in Pittsylvania Co., Va. before July 19, 1819, the date his will was proved in court and recorded. The will, which he signed on Nov. 23, 1812, mentioned his sons Ambrose, William and Philip Hawker; granddaughter Polly Butt; the heirs of his children Drusilla Butt, Priscilla Clarke, and Basil Hawker; and daughters Darcas Rice, Sarah Riddle, Mary Thompson, Elizabeth Seal, Anna Butt, Lydia Rice, and Deborah Earp.

The sons of Ambrose and Lydia Hawker, Ambrose, William and Philip, continued to live in Pittsylvania Co., Va. The census records for 1820 and 1830 suggest that the three brothers lived quite close to each other.

Philip and William Hawker died in 1856 and 1857, respectively, in Pittsylvania Co., Va. We do not know at this time when Ambrose Hawker died.