Asa W. Pruett, son of Thomas S. Pruett and Icyphenia Ford, married Mary Alice Climer, daughter of Isaac Denny Climer and Sarah Jane Hill on Dec. 31, 1891. According to the marriage license, the couple was married at the "I. [Isaac] D. Climer" residence in Pittsylvania Co., Va. Asa's occupation was listed as "Farming." His age was listed as "Twenty five years," but other source documents indicate that he was actually 27 years old at the time. Asa and Mary Alice Pruett had the following children: The Pruiett and Climer families moved to Ohio around 1898 based on the fact that Asa and Mary Alice's son Isaac was born in mid-1897 in Pittsylvania Co., Va. and died in early 1899 in Hamilton Co., Ohio. Around that same year, based on the 1898 Danville City Directory, it appears that Icyphenia Pruett moved from the farm into Danville and lived with her daughter, Susan T. Pruett at 541 N. Main St. In the 1900 census, Icyphenia Pruitt was back at the farm in the Dan River District of Pittsylvania Co., Va. living with her granddaughter Sarah L., born in June 1888. This is the first indication we have of a more precise birth date, June 1840, for Icyphenia (Ford) Pruitt. The census record indicates that she had given birth to six children and that three were still living. This suggests that William H., Susan T. and Sarah E. Pruitt died before 1900 since we know that Byrd, Asa and John lived long after 1900.

Icyphenia again moved to Danville shortly after the 1900 census was taken. In November 1900 Thomas S. Pruitt's surviving children by Susan Epperson appear to have exercised their right to sell the family farm (see Pruiett, Part 5) as evidenced by the following note in the margin of their 1859 deed: Examined and Delivered to Joseph Booth Nov. 19th, 1900. Whether the sale of the farm precipitated Icyphenia's second move to Danville, or her move precipitated the sale is not known, but it's clear she must have made the move sometime between June and November 1900. 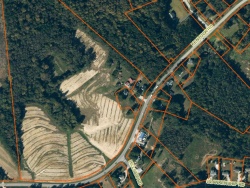 The knowledge that Thomas S. Pruitt's Farm was taken over by Joseph Booth in November 1900 has given us some useful information to help us determine the location of the farm. It's clear from census records from 1910 through 1940 that the farm stayed in the Booth family. One existing home and its 3/4 acre lot is still in the Booth family and next to that lot is a Booth Cemetery with family members related to both Joseph Booth and his nephew Thomas H. Booth who was listed as the owner during most of this time period. Only one of the forty headstones in the cemetery has a date of death earlier than 1902. Given the location of the cemetery and the one remaining lot owned by the Booths, we can say with some degree of certainty that the farm was located on present day Rt. 729 between Kentuck and Laurel Grove. The location is about a mile east of Rt. 726 and five miles west of Laurel Grove.

We do not know precisely when Icyphenia died or where she was buried. We do know that she appeared in the 1902 Danville City Directory (as Asphenia Pruett, widow of Tom) and was living with her son Byrd Pruett at 431 Sutherlin. The 1904 Danville City Directory indicates she was living at 606 Sunnyside in North Danville. Her son Byrd and his family lived nearby at 617 Cherry. She does not appear in subsequent City Directories nor in the 1910 census. We presume she died around 1905. Byrd F. and Lucy Pruitt continued to live in Danville for many more years. The 1917 Danville City Directory shows them living at 415 Plum St. The picture at the right was taken around 1918 in front of that house. You can see two stars (likely blue) indicating they had two sons in the armed forces at the time. According to the 1917 directory, both Samuel Pruitt and George Pruitt were living with their parents, Byrd and Lucy, and working as mill hands like their father. Later that year, they joined the navy and army respectively and appear in this picture with their mother, Lucy, in front of their house on Plum Street. George Pruitt departed for Europe on the Finland on June 15, 1918. According to a history of the 29th Infantry Division, George's 116th Virginia National Guard Regiment "formed as part of the 29th Infantry Division, and ... spearheaded an attack in October 1918 during what was known as the Meuse Argonne Offensive. During this attack, the Regiment earned the French Croix de Guerre and Sgt. Earle Gregory of the 116th Infantry earned the Medal of Honor, the first Virginia Guardsman to receive the award." George Pruitt began his return voyage to Newport News, Virginia on the Matsonia from Saint Nazaire, France on May 9, 1919.

Charles Pruiett, son of Asa W. Pruett and Mary Alice Climer, died on June 11, 1905 after a lengthy illness. About a month before he died, someone wrote him a letter expressing the wish to see the family and Charley's little sister and the hope that "little Charley" would recover soon. The letter was not signed, but it was likely from Robert Climer, Mary Alice (Climer) Pruett's brother, who was serving in the Coast Artillery Corps and was likely stationed around that time at Ft. Preble near Portland, Maine (see "Port Me." just below the date in the upper right corner of the letter). Here's a picture of Charles Pruett from around 1900. We also have his report card and Baldwin Speller from 1905. Viola A. Pruiett, born on April 9, 1906 was the last child born to Asa and Mary Alice (Climer) Pruiett. Here's a picture of Viola with her friend, Dorothy Reed, around age 7 or 8. Viola graduated from 8th grade at Linwood School in 1919. Five years later, her father died when she was just 18 years old. In 1929 Viola became engaged to Arthur T. Figenbaum. They were married on April 27, 1932 at Grace Methodist Church in Norwood, Ohio. Viola and Arthur seemed to move around a bit during their brief marriage which ended in divorce in 1938 when they were living in Miami, Dade Co., Florida. Viola worked as a clerk and bookkeeper most of her life and was involved in a few organizations including Eastern Star. She lived in Cincinnati with her mother for many years before her mother died in 1961. Viola A. Pruiett died on April 16, 1993 in Cincinnati, Hamilton Co., Ohio. She is buried at Graceland Memorial Gardens in Milford, Ohio alongside her brother, William E. Pruiett, and other family members.

William Ellis Pruiett, son of Asa W. Pruiett and Mary Alice Climer, married Erma May Brown, daughter of Elmore Grant Brown and Jeanette (Turner) Brown, on May 15, 1915, in Hartford City, Blackford Co., Indiana. Erma May Brown was born on May 18, 1894, in Cincinnati, Ohio. They were married three days before her 21st birthday (see marriage license). William Pruiett gave his occupation as Salesman and his residence as Delaware Co., Indiana. He also indicated his mother, Mary Alice Climer, was living in Muncie, [Delaware County] Indiana. Erma May Brown gave her residence as Montpelier in Blackford Co., Indiana. It's not known exactly why they were married in Indiana; however, Indiana was known as a "marriage mill" in the early 1900s because of their lax marriage laws (including no waiting period) as compared to Ohio and other surrounding states. In fact, William's sister, Dolores, also married in Indiana in 1920. [Marrying out of state was something Asa Pruiett understood quite well since his three brothers, William, Bird and John, all crossed over the Virginia state line to marry in Caswell Co., N.C. in the 1880s and 1890s.] We're pretty confident that both William Pruiett and Erma May Brown were living in Cincinnati with their parents before they were married. William and Erma May (Brown) Pruiett had the following children: Thelma and Ralph Pruiett around 1925

Dolores May Pruiett, daughter of Asa W. Pruiett and Mary Alice Climer, married Wilbur Langsdale in 1920. Although his marriage record says he was born on Dec. 1, 1897, we are confident he was actually born on Dec. 1, 1900. He was not listed in the 1900 census and the 1910 census indicated he was age 9, which is consistent with a birth date of Dec. 1, 1900. In addition, 1900 is the year of birth on his headstone at Laurel IOOF Cemetery in Hamilton Co., Ohio. Their daughter, Betty Jane Langsdale was born on June 20, 1921. Thelma Louise Pruiett, daughter of William Ellis Pruiett and Erma May Brown, married Wesley Allen Iredale on June 23, 1933. He was born on Feb. 7, 1916. They had the following children, all born in Cincinnati, Ohio: Ralph Ellis Pruiett, son of William Ellis Pruiett and Erma May Brown, married Esther Ruth Parker, daughter of Milton Kasper Parker and Margaret Jane Seal, on July 10, 1943. She was born on Jan. 9, 1923, in Caryville, Tenn. They had the following children, all born in Cincinnati, Ohio: Robert William Pruiett, son of William Ellis Pruiett and Erma May Brown, married Marjory Joyce Voline in 1956. They had the following children: